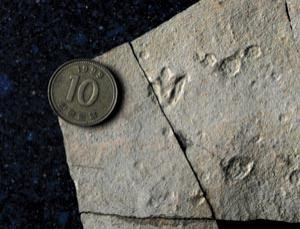 ONLY just hatched and new to the world, the little guy who left these prints in the riverbed was probably running for its life. Barely 10 centimetres tall, the hatchling would have been the length of a wren and easy prey for pterosaurs and other hungry dinosaurs.

The prints are the tiniest dinosaur footprints ever found. They were left between 125 and 110 million years ago, are just 1.27 cm and 1.51 cm long, and clearly show soft foot pads and three pointed claws.

Kyung Soo Kim of Chinju National University of Education in Jinju, South Korea, says the baby track-maker was a cousin of the fearsome T. Rex and belonged to the theropod sub-order, which includes tyrannosaurs.

"It was running to hide right after hatching," Kim speculates. It had plenty of reasons to do so: nearby tracks show it shared its home with fleet-footed, meat-eating dromeosaurs, such as Velociraptor, together with other dinosaurs, pterosaurs and shorebirds.

The prints were discovered in 2008 during the construction of a reservoir on Changseon Island, located 320 kilometres from the South Korean capital of Seoul.

The previous smallest dinosaur footprints were found in 2004 on Skye off the west coast of Scotland and were up to 40 per cent bigger than the present find. Those prints, which were found by Neil Clark of the Hunterian Museum in Glasgow, UK, were thought to have been made by Coelophysis. Kim presented the find at a conference in Bristol, UK, last week."

The smallest dinosaur tracks known from the ichnogenus Minisauripus were discovered from the Cretaceous Haman Formation of Changseon Island on the southern coast of Korea. The island vertebrate ichnofauna consists of Minisauripus cf. zhenshounani, Dromaeosauripus hamanensis, Ignotornis yangi, Koreanaornis hamanensis, pterosaur trackways, and other sauropod, theropod, and ornithopod footprints. A total of 12 Minisauripus tracks include one trackway which comprises 4 tracks ranging from 1.27 to 1.51 cm long and 1.06 to 1.30 cm width. The tracks are characterized by asymmetric, very small, well-preserved pads, with prominent claw traces. The ichnogenus Minisauripus represents a diminutive theropod footprint with two ichnospecies: M. chuanzhuensis and M. zhenshounani. The latter is narrower than the former with digits less-divergent and digit II relatively shorter. Therefore, these tracks resemble M. zhenshounani rather than M. chuanzhuensis.

The ichnogenus Minisauripus is known from Sichuan and Shandong Provinces, China and Changseon and Sinsu Islands, Korea. M. chuanzhuensis from Sichuan Province and M. zhenshounani from Shandong range from 2-3 cm and 2.5-6.1 cm long, respectively. Eight Korean tracks assigned to M. cf. chuanzhuensis and M. cf. zhenshounani are 2.3-3.5 cm long. Previously, the smallest known dinosaur footprint was a 1.78 cm long theropod track discovered on the Isle of Skye, Scotland and recorded in the Guinness Book of World Records. The dinosaur tracks from Changseon Island are between 15 and 29% smaller than those from Skye. The smallest footprint from Changseon Island is thought to have been made by a baby dinosaur right after hatching, because height at the hip of the track maker by Thulborn’s allometric equation is roughly estimated at only 4 cm. Thus the track maker’s total height is estimated at less than 10. In comparison Microraptor, the smallest known dinosaur was a giant at 42-83 cm long. 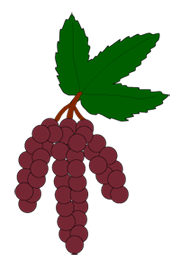